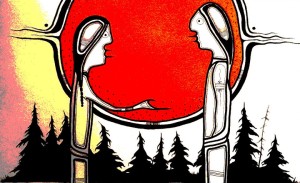 “We call upon the federal government to provide sustainable funding for existing and new Aboriginal healing centres to address the physical, mental, emotional, and spiritual harms caused by residential schools, and to ensure that the funding of healing centres in Nunavut and the Northwest Territories is a priority.”

TRC CALL TO ACTION #21 is of particular importance because it addresses the issue of intergenerational mental trauma which was caused by the experience of Residential Schools.

Intergenerational mental trauma is the collective trauma that multiple generations of a family or community experience due to the ripple effect of an emotional, mental or physical trauma that is directly experienced by an initial subject.

The trauma of Residential Schools has been found to affect at least two generations beyond those who attended these institutions, as the cycle of abuse and neglect was continued with the descendants of those who had internalized and consequently perpetuated the treatment they received in the schools due to PTSD, anxiety, depression and other adverse impacts, which affected their ability to parent and develop healthy and positive familial and communal relationships

Another source of intergenerational trauma is the loss of language, traditions and culture caused by the assimilation strategies of Residential Schools and which has resulted in feelings of alienation and hopelessness for the Aboriginal community which can be categorized as poor mental health.  [Menzies, P., (2010). Intergenerational Trauma from a Mental Health Perspective. Native Social Work Journal, 7, 63-85].

Research and Statistics on Aboriginal Mental Health issues make it clear that this community is in a state of crisis in this area. First Nations experience higher rates of depression and twice the suicide rate of the general Canadian population (Source: First Nations and Inuit Regional Health Surveys, 1997: A Synthesis of the National and Regional Reports). The suicide rate of Inuit people is up to 11 times the rate of other Canadians. Nunavut has one of the highest suicide rates in the world and since 1999, 27% of all deaths have been due to suicide. (Aboriginal People Issue of Visions Journal, 2008, 5 (1), pp. 6-7). Therefore, due to the adverse effect of Residential Schools on Aboriginal mental health, it is imperative that action be taken by the Federal government to redress these issues.

The federal government in collaboration with the Aboriginal community should establish culturally appropriate mental health centres, following the model of Anishnawbe Health Toronto

This is a conceptual plan which we advance to the federal government in the spirit of solidarity with the Aboriginal community. Our goal is not to impose a plan for Canada’s Aboriginal peoples but to demonstrate a way that the TRC’s recommendations can be put into action, to encourage the government to work collaboratively with the Aboriginal community to implement whatever course of action they determine to be best.

Our plan conceptualizes a funding model that the government of Canada can use to provide funds to Aboriginal communities to facilitate their implementation of holistic mental health centres and continued funding for existing Aboriginal mental health facilities.

Special thanks to Social Worker, Harvey Manning of Anishnawbe Health Toronto & Billroy Powell, Policy Analyst at the Ministry of Training, Colleges and Universities